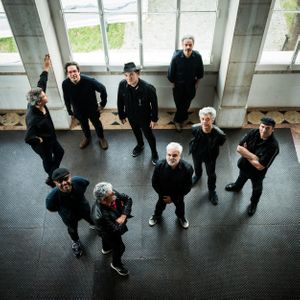 Resistência, one of the most spectacular and emblematic Portuguese music Bands of the first half of the 90s, supergroup responsible for some unforgettable successes.

The project founded by Pedro Ayres Magalhães, Fernando Cunha, Tim and Miguel Angelo, consisted in a joint of efforts between several musicians, coming from different bands, and the transformation, adaptation and new orchestration of the themes brought by them (and not only) for a strand of acoustic guitars, aimed at valuing the “voice” as an instrument, and with the combination of these same voices, showing the strength of the union. The interpretation of these themes took on a new life and a genuine soul.

This list of founding artists was joined by singer Olavo Bilac and musicians Alexandre Frazão on drums, Rui Luís Pereira (Dudas) and Fredo Mergner on guitars and also Fernando Judice and Yuri Daniel on bass and already on the “Palavras ao Vento” Tour percussionist, José Salgueiro.

The cast was thus complete with five main voices and five acoustic guitars, drums, percussion and Fernando Judice takes the bass for the tour.

The Band was inactivated by 1995, so the musicians returned to their own respective original projects.

This message is only visible to admins.

There has been a problem with your Instagram Feed.